Boldly going where no one has, exploring strange new worlds, seeking out new life and new civilisations...It's the stuff ordinarily done by people with noted 20/20 physical faculties, or in fiction with the drop-kick fettle of a still athletic Captain Kirk or his trimmer, pioneeringly racially diverse crew.

But the inclusivity of teams travelling beyond the exosphere will, in the near future, span all kinds of disabilities too. Age is already no impediment, as a 90-year-old William Shatner (the original Star Trek Captain James T. Kirk) just recently proved, becoming the oldest person in space, at the age of 90, on his widely-reported and opinion-splitting Blue Origin New Shepard rocket ship jaunt.

What of hearing impairment? Well, the limits and solutions pertinent to hearing disability have been tested this December 2022 in zero-gravity research involving San Francisco-based tech outfit SonicCloud, whose co-founder Larry Guterman answered Audiology Worldnews' questions, and who summed up the planet's increasingly sensitive stance on aptitude for spacefaring thus:

"If we have the technology, why shouldn’t we level the playing field for people with disabilities? Space travel, travel to space stations, will no longer be the sole purview of the top ten air force pilots in the country in five years. If we make earth accessible via sidewalk ramps, why wouldn’t we do the same wherever humans go? And if we do it in space, won’t it inspire greater attention to the importance of it on Earth?"

A mission to promote disability inclusion in space exploration

This first global mission comprised ambassadors from four countries (Australia, Brazil, Germany and Spain). Research carried out on the first of such parabolic flights led into this second flight experiment's investigation of how the physical environment of a space vessel can be made more accessible with simple modifications to improve safety for everyone. 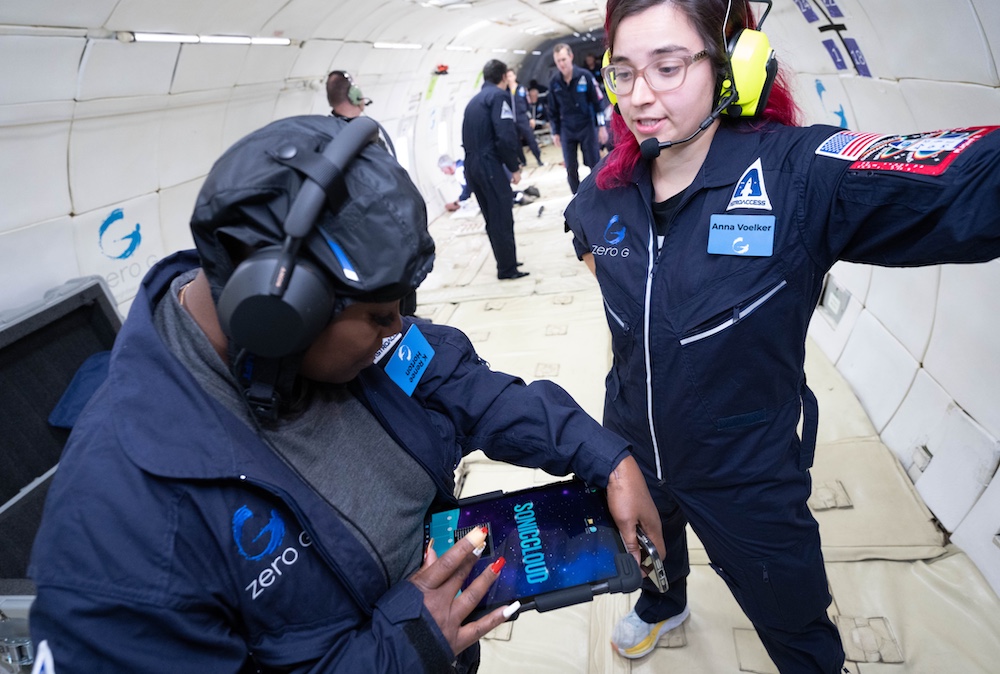 The programme included a more granular hearing test for more precise creation of the hearing profile, covering a wider range of loss, both for the hearing test and the listening solution. It spanned discomfort levels, leading to better speech understanding targeting, using better self-tuning than any other application, better real-time tuning and situational adjustments than any other application, and employing more targeted sample profiles, claims SonicCloud. These profiles cover a wider range and leverage a greater number of useful psychoacoustic parameters.

The claims for SonicCloud's prowess in terrestrial or space flight situations embrace an impressive gamut of applications, including the use of sample profiles and/or live tuning with a high degree of control on all audio on the laptop, desktop or tablet computer, with proprietary digital signal processing that optimises for both speech and music.

A heavyweight team for the weightless experiment

The AstroAcces Ambassadors took part in weightlessness testing for lunar gravity, Martian gravity, and zero gravity, experiments designed to observe how the physical environment aboard space vessels should be modified so that all astronauts and explorers, regardless of disability on Earth, can live, work, and thrive in space.

Larry Guterman, SonicCloud co-founder (LG): The specially modified Boeing 727 G-FORCE ONE aircraft is much noisier than a passenger jet because it’s been emptied out of all but the necessary safety padding and equipment. Typically, it’s about 90 decibels of background engine and flight noise (if not louder) in-flight. Now, add into the mix commands being issued by the AstroAccess flight director, the support staff yelling commands to the disabled crew, and you’ve got a mishmash of loud, unpleasant sounds that makes it even harder for a person with hearing loss to understand speech than a person with “normal” hearing.

For example, if you have hearing loss and only able extract 50%, 60% or 70% of the speech from the background noise, that’s not nearly enough to understand the gist of what’s being said. Especially high frequency sloping and sensorineural loss, the most common form of hearing loss.

Zero G/Tasha Dixon - Victoria Garcia [L], is using SonicCloud’s sound personalization software that allows her to improve speech understanding and tailor the audio to her hearing ability, in conjunction with Sony headphones.

AWN: What precise equipment and solutions were being tested?

LG: We tested the SonicCloud desktop sound personalisation solution on a Windows tablet. In preparation for the flight, “Team SonicCloud” created a hearing profile tailored to their unique hearing ability. Each team member adjusted proprietary psycho-acoustic parameter settings on the SonicCloud control panel. The selection of a sample profile from SonicCloud’s menu of sample profiles allowed the crew to further optimise their hearing profile for the clearest understanding of speech.

To be clear, SonicCloud is not an equaliser—it’s much more. If an equaliser is a bicycle, SonicCloud is a Boeing 787. During the flight, the Ambassadors made further real-time tuning adjustments to their selected hearing profile on the SonicCloud user interface, to account for the changes in background noise aboard the flight—even though the Sony Active noise cancellation headphones are great, the Ambassadors were still in a very different acoustic environment than when they set their hearing profiles on the ground.

American Sign Language communication was tested using Go-Pro cameras mounted to the heads of Deaf ambassadors. For example, could ASL be understood when one ambassador was upside down? 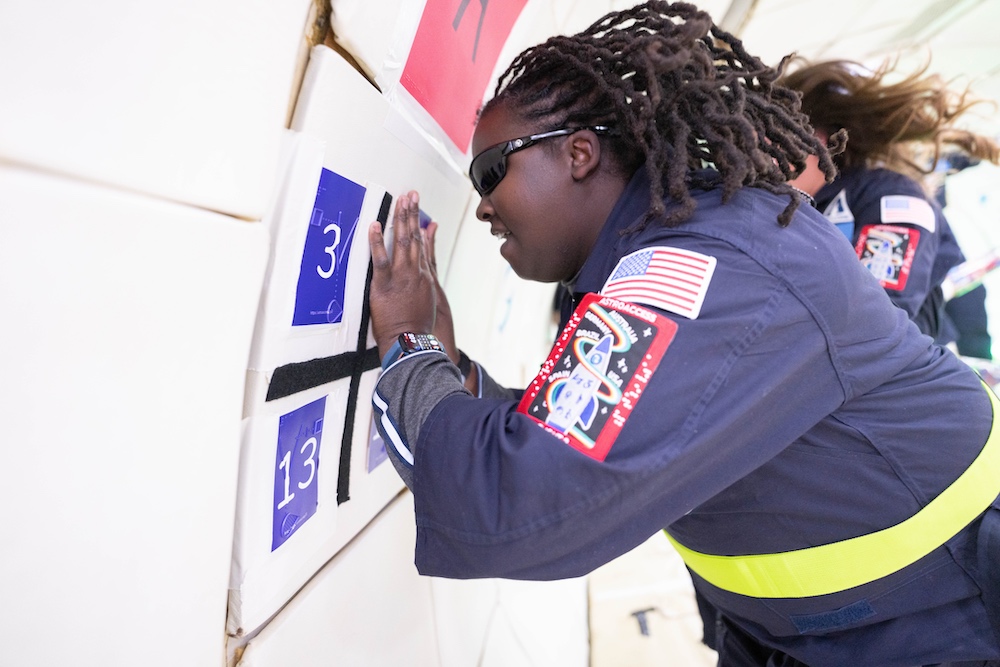 AWN: How long does a parabolic flight provide a zero-gravity environment? What actual aircraft is used?

LG: (Information taken from Zero G’s website. The number of manoeuvres (18 times) was updated to reflect the AstroAccess flight). According to Zero-G’s website, G-FORCE ONE flies in FAA-designated airspace blocks approximately 100 miles long and ten miles wide. The process starts with the aircraft flying level with the horizon at an altitude of 24,000 feet. The pilots then gradually increase the angle of the aircraft to about 45° relative to the horizon until reaching an altitude of 32,000 feet.

During this phase, passengers feel the pull of 1.8 Gs. Next, the plane pushes over the top of the parabolic arc and the zero-gravity phase begins. For the next 20-30 seconds, everything in the plane is weightless. Finally, the plane gently pulls out of the maneuver, allowing flyers to gradually return to the floor of the aircraft.

The manoeuvre was flown 18 times over the course of the AstroAccess flight, each taking about ten miles of airspace to perform. In addition to zero gravity, flyers aboard G-FORCE ONE experience Lunar gravity (one sixth your weight), achieved by flying a wider arc over the top of the parabola. On a typical flight, parabolas are flown in sets of three to five, with short periods of level flight between each set.

AWN: Might the results of these experiments translate beyond usefulness for the disabled in space flight, perhaps through findings that can enhance hearing aid or implant technology in general?

LG: Yes! The results are already useful. We know, for example, that one of our Ambassadors could not understand the instructions when she listened to them once her headset was taken off and she was not using SonicCloud. With SonicCloud on, she could clearly understand the commands. Her experience with SonicCloud meant that she had less of a cognitive load. Rather than working really hard to understand the words she could instead focus on interpreting and analyzing the instructions instead of simply understanding them. This information will help us further develop our technology to work in similar auditory situations, including on Earth.