What can biobanks bring to hearing, and in particular to tinnitus?

The growing informational and material resources offered to researchers by biobanks could help bring game-changing discoveries in hearing, even cures. And research into tinnitus is just one area that can potentially benefit from these data collections as their focus on hearing becomes broader.

One of the key presentations during the British Tinnitus Association’s 2020 Virtual Conference in October was given by the University of Nottingham’s Prof. David Baguley on the subject: Biobanks - What can they tell us about tinnitus? But as  Prof. David Baguley explains, breadth of information needs to be accompanied by depth and specificity if dividends from investing in biobanks are to come with greater speed and frequency.

The impact of Covid-19 on funding for research has made biobanks even more important, and the active and expert British Tinnitus Association (BTA) now has a stated mission to create a tinnitus-specific biobank.

But biobanks themselves have not had such a long period in which to develop; even their most currently agreed definition comes from 2011 when scientist Robert Hewitt, working on biobanks since the 1990s, described them satisfactorily as ˝an organised collection of human biological material and associated information stored for one or more research purposes.˝

The limitations of biobanks

Prof. Baguley certainly recognises the value of biobanks but points to limitations. ˝They are only as good as their numbers˝, he told his audience during the BTA Conference webinar, adding that in gleaning information from volunteers generally healthier than average, they have been criticised for not being representative of the population. They also struggle to grasp certain complex and diverse diseases, and tinnitus may be one of these. Samples defined theoretically some time ago may not be optimal as time goes by, and there are practical problems with samples too.

Since 2006, UK Biobank has spent large amounts of money and time developing information on 500,000 people, compiling not just informational data but also many kinds of samples of bodily fluids and all-important image scans. But it takes around six months from the date of application to finally access any data researchers require. And perhaps more significantly—and confoundingly— for audiology researchers is that its mission statement covers visual but not auditory issues.

Prof. Baguley admires the scale, breadth, and ambition of the project. But ˝in terms of hearing, there are issues with the depth,˝ he points out. One major drawback to using UK Biobank for hearing and tinnitus research is that it offers no audiometric data.

There is key information from the Digit Triplet Test, although the sustained attention and concentration required for this undermines its reliability. And in hearing surveys, UK Biobank uses self-report questions for subjects rather than validated questionnaires. The tinnitus information is limited.

These and other drawbacks do not stop Prof. Baguley recognising the benefits of certain hearing studies UK Biobank has encompassed, particularly in genetics, comorbidities, and cognitive science. Thirteen papers mention tinnitus, eight of them with a specific focus. 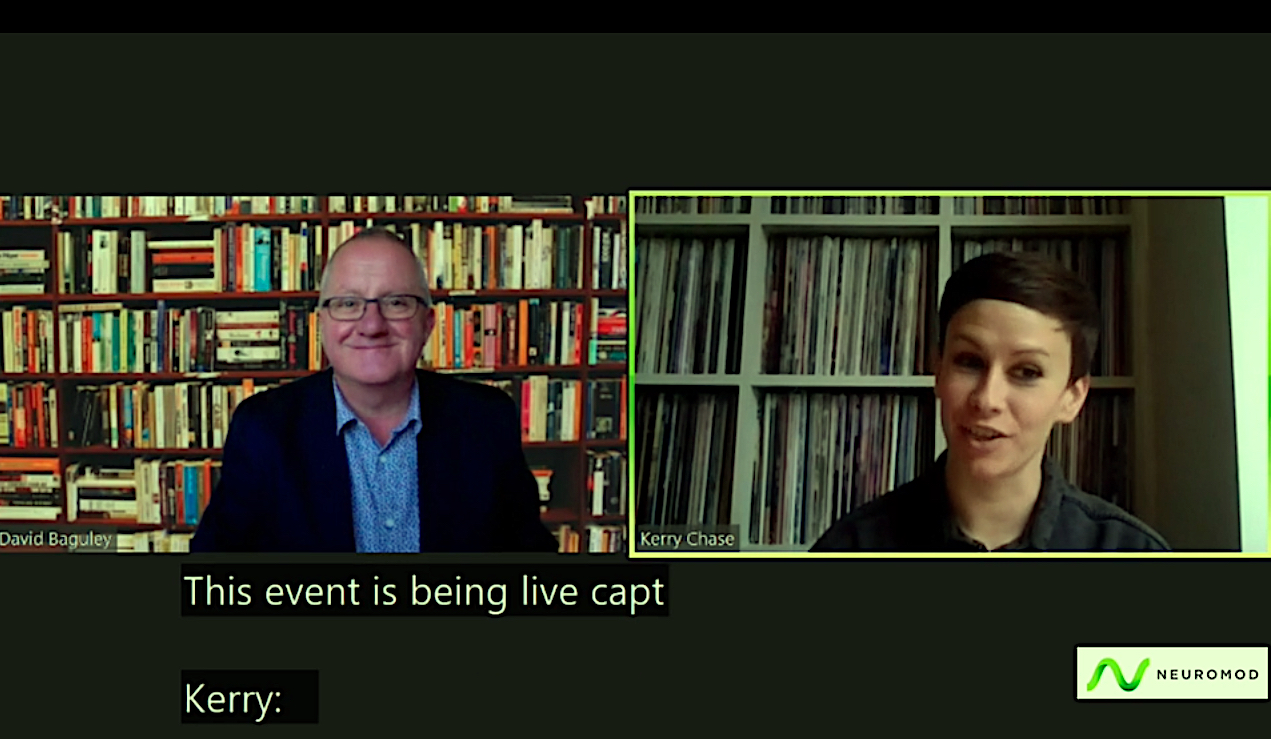 © PW  Prof. David Baguley during the British Tinnitus Association presentation, in discussion with Kerry Chase, the BTA’s Head of Communications

These projects have been confirmatory rather than revelatory,˝ said Prof. Baguley, ˝but there are some really interesting studies under way. I’m not at liberty to go into detail on these but I do know that there are going to be major investigations of genetics, and Christopher Cederroth (Associate Professor in Hearing Sciences), my colleague in Nottingham now, and colleagues are going to be looking at this in some depth, going deep to look at the risk factors leading to tinnitus issues and looking at the natural history.˝

UK Biobank’s imaging data is also proving useful to the Nottingham researchers. Prof. Baguley revealed ˝potentially groundbreaking projects˝ that use this imaging data to look at connectivity within the auditory brain of both auditory and non-auditory structures, and look at attentional aspects and the salience of the tinnitus sound.

A tinnitus-specific biobank - “ A powerful tool. ”

While Baguley and colleagues are also focusing on other global biobank projects, such as Patrick Neff’s ˝valuable˝ Zurich-based efforts to detail all tinnitus-based resources, the possibilities that could emerge from hearing-specific biobanks—and concretely, a tinnitus biobank—have fuelled Nottingham’s own project—with Dr Ian Wiggins as the NIHR Nottingham BRC Hearing Theme Bioresource lead—to design such a resource to add depth what UK Biobank offers. The scope this would bring in terms of studying the genotype (including the molecular biology of tinnitus) and the phenotype (symptoms and test results) would be ˝a major source of research and a major opportunity,˝ Baguley underlines. Its boons would include improved diagnostics, closer examination of lesion sites, study of mechanisms, targets for treatments, and use of the new paradigm for auditory-evoked potentials; ˝real opportunities,˝ says Baguely.

The BTA now has a tinnitus-specific biobank as part of its mission statement, and Prof. Baguley, former BTA President, thinks it would be a ˝clear leader˝ in moving the project.

Could the desired tinnitus-specific biobank provide more than a ˝major opportunity˝, in other words a cure? ˝It is urgent that we seek solutions that will reliably and consistently inhibit the tinnitus signal in the vast majority of people. Understanding the complexity of tinnitus and its mechanism is important and the biobank gives us the different opportunities to look at the genotype and the phenotype so I think it would be an immensely powerful tool to have.˝

˝It’s only recently that I’ve understood the power of these biobanks, and one of the difficulties is that the data is quite difficult for clinical audiologists and otologists to interrogate and interpret. It’s complex, the coding is difficult, and you need epidemiologists and geneticists and biostatisticians to help you with that. We have all of those people in the group that I now work with, so you do need a multidisciplinary approach to get value out of a biobank, and there aren’t that many multidisciplinary groups that are interested in tinnitus,˝ explained Prof. Baguley.