In an impassioned valedictory speech to BSHAA conference delegates, the Association’s Chief Executive for the past seven years, David Welbourn, made clear the chagrin he feels over "a bunch of unfinished stuff" as he leaves office.

Addressing the annual conference of the British Society of Hearing Aid Audiologists in Oxford, Welbourn cut a figure of fierce commitment to the profession he had joined after many years of experience in health leadership and governance. His period of BSHAA stewardship had allowed him to discover that "audiology is something that doesn’t half get you by the throat, and draws you in to something deep and profound."

While lamenting the way in which increasing rules and regulations on best practice remove the freedom of audiologists to exercise their professional judgement, Welbourn anxiously pointed out that in order to achieve strong leadership in the profession, there is a need to accept the "tough challenge” of stepping back from the “personal fulfilment" to look at population and national issues.

"Something I’ve realised only in relatively recent times is that most audiologists are practical, hands-on, and I can’t imagine the personal fulfilment that practising audiologists feel on a day-to-day basis as they encounter and change people’s lives," Welbourn earnestly proclaimed.

"You have to be prepared to let go of that hands-on, emotional, entangled, sucking-in experience that makes you what you are," he stressed. 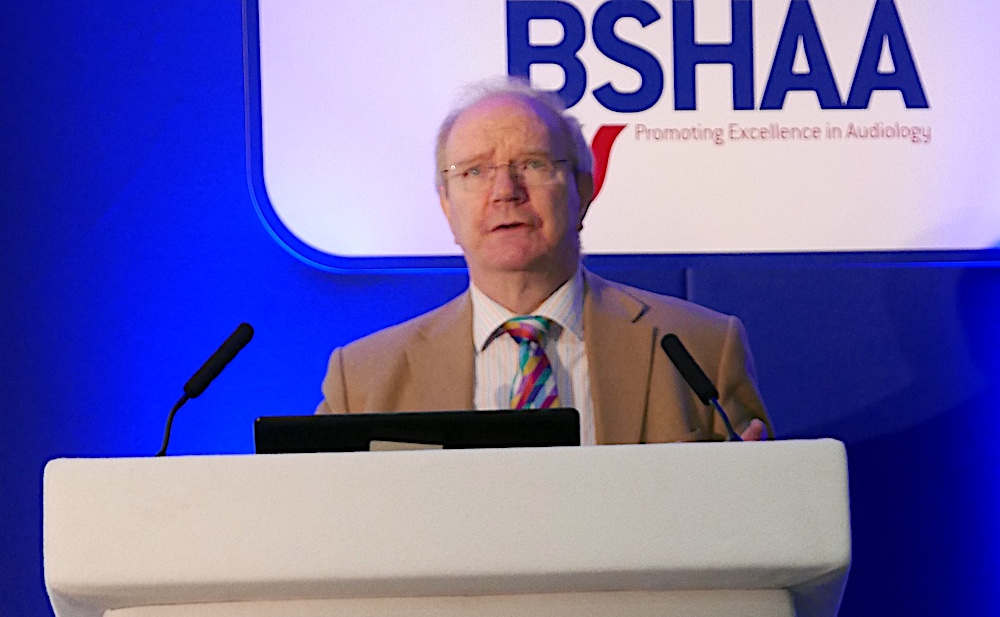 PW      Departing Chief Executive David Welbourn “I’m going to be leaving a bunch of unfinished stuff... and with quite a lot of chagrin.”

Recognising the increasing ambition of the Health and Care Professions Council (HCPC) to meet its aim to encourage professions to excel, Welbourn fumed at the HCPC’s lack of grasp of the task in hearing care."Bear in mind that a regulator’s role is to set the minimum standards, and the professional body’s role is to set the standards of excellence to which everyone should aspire - and we have that partnership together, and it’s great to see that HCPC is starting to work to understand - but the truth is that they do not understand the complexities and folly of the world of audiology, which you would never design a profession to work this way."

Uncertainty brings fear, said Welbourn, who outlined the objective that technology brings for the professional."Technology is going to introduce self-care into those two-thirds that are not getting [care], and then the whole profession needs to start to think about not only how do we bring people into care, but how we bring people from beyond the horizon of self-care into professionally supported care," he affirmed.

The UK hearing profession has so far reached an impasse in efforts to unify its associations into one unified College. Welbourn acknowledged this effort, but pointed to what he considers a fundamental underlying unification requirment."We’ve talked long and hard about the college to create a stronger, more powerful voice for audiology, but against all that my biggest regret is that we haven’t broken the back of the stupidity that there is a public sector pathway for audiology and a private sector pathway for audiology, which is a complete waste of spare resources."

"The most important change that we can bring," continued Welbourn," is to adopt something equivalent to an optician model, in which there is a combined public and private sector pathway in which the limited public funds are not available universally; they are available to those who genuinely need it, because 90% of audiology is actually about social care and lifestyle; it’s not about health. And we confuse all those things."

The departing CE of BSHAA left a message to his as yet unappointed successor: "More than anything, I would encourage my successor, and the Council, and all of you, to work hard to unite the public and private and pathways for audiology care. Because without that, the two thirds of the population with hearing loss that is limiting their freedom in life, limiting their fulfilment, will not have any voice on their behalf, and that saddens me as I leave."