"It is difficult to travel from other countries due to Covid restrictions, so there are fewer foreigners who have come this year" explains Beate Gromke, President of the EUHA Congress, before pointing out that despite everything one exhibitor made the trip from Qatar.

"We expected to have around 70% attendance compared to 2019, but attendance is 62%" specifies Gromke, who is also president of the European Union of Hearing Aid Acousticians. 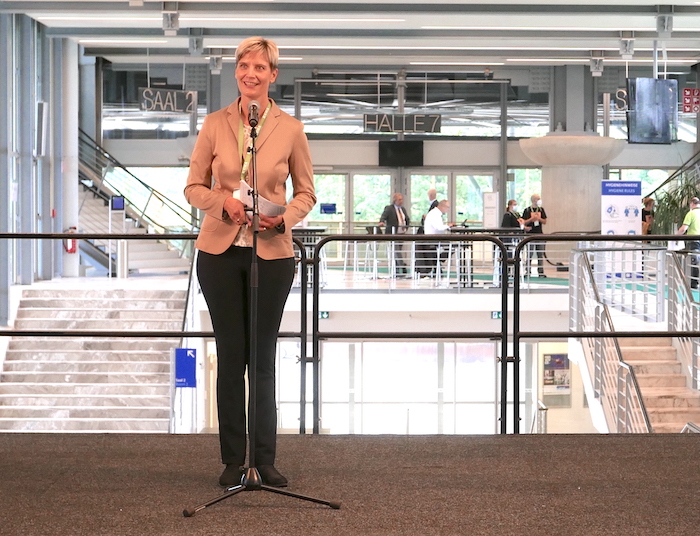 EUHA is the first congress to be held in the Hannover Exhibition Center, the largest such complex in Germany, for a year and a half, so it looks like a test for the German government and a pioneer event for congress organisers.

The organisation decided only four months ago to hold the congress face-to-face, after interviewing the main exhibitors, Sonova, WS Audiology, Demant Starkey, and GN Hearing. All responded "present" in the event of the congress being held physically.

So the organisation went ahead switched to September from its originally booked date in October, although doubts existed right up to the last moment, the organisation admits. "Visitors decided to register very late this year," explains Beate Gromke.

Yet the exhibitors are present and the stands as grand and lovely as ever.

© PW Visitors arriving at EUHA at 0900 on Wednesday September 15

Some French visitors, in addition to the Audio infos team, made the trip in spite of it all: "We come to EUHA because it is the only place where we can see the manufacturers directly and not the regional branches" said Guilio Di Capua, CEO of Seltech, a manufacturer of electronic components for hearing aids based in Créteil, in the Paris region.

Turning the corner of one aisle, we bump into Starkey CEO Brandon Sawalich, fresh over from the United States via a visit to the Company's Italian interests, and Soren Nielsen, the CEO of Demant, from Denmark. And there is even a French exhibitor, MG Development, specialist in hearing hygiene products, based in Mauguio, in the south of France. 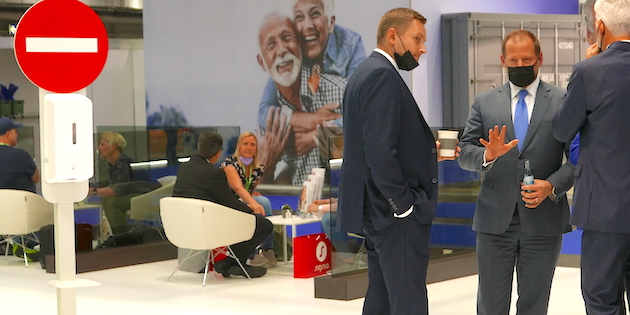 Next year? "Since last year, we have not planned anything," said Beate Gromke, visibly rocked by the experience of the pandemic. However, the place and the date are already fixed.

The EUHA Congress will be held in Hanover again, whereas previously the congress was held alternately with Nuremberg. “We had to settle somewhere, and we chose Hanover,” concludes Beat Gromke. An appointment is made for next year, from October 12 to 14, 2022 in Hanover.