With an approach to sound and hearing that comes out of the box - in many teasing senses - Berlin-based Mimi has grown from a start-up to a growing concern with a persuasive argument.

Mimi does not make hearing aids, nor any unboxable physical product at all. But its buzzword - Hearing well is wellbeing - might sound familiar (Phonak uses well-hearing is well-being). How, then, does this sound personalisation tech outfit fit in with the well-being narrative used by hearing aid manufacturers?

Think out of the box for a moment about sound. See it as a river.

But understand a river not as mere flux from a source to the sea, but as a series of points connected by water.

By intervening at some of those points, for example with locks or sluices, changes to the flow can conjure benefits for everyone along its course.

Something akin to this kind of pondering has allowed Berlin-based Mimi to build an enterprise based on turning the flow of sound into what each of us might want or be able to process for optimum hearing enjoyment. Because so much sound now arrives to us along a digital river, enhancing it doesn’t even mean having to manufacture hardware - Mimi makes its magic felt purely by providing its psychoacoustic science to the consumer tech world.

In a nutshell, through Mimi’s business deals, the sound from your Loewe TV or Skullcandy earbuds comes defined by Mimi technology to match a personal profile you provide through what is usually no longer than a two-minute hearing test. This optimised sound experience involves no greater effort on the user’s part - the profile will be remembered by the device - and the personalisation can even be aggregated across a room full of similarly tested people (watching a televised football match, for example) for whom a smart calculation will provide a more-than-acceptable compromise in the sound delivery.

Mimi’s clever sound enhancement mission is framed and pitched as a well-being dynamic. And to take a fairly recent perspective (definitions go back at least to Aristotle) that might mean aligning broadly with what the US psychologist Ed Diener broke down in 1984 as comprising “frequent positive affect, infrequent negative affect, and cognitive evaluations such as life satisfaction”. Mimi’s particular take on how this also fits into current audiology community rationale was cogently outlined to Audio Infos by the company’s co-founder and CEO, Philipp Skribanowitz, who stresses both the sustainability and accessibility of Mimi technology, but underlines that “enjoyment is the main focus”. 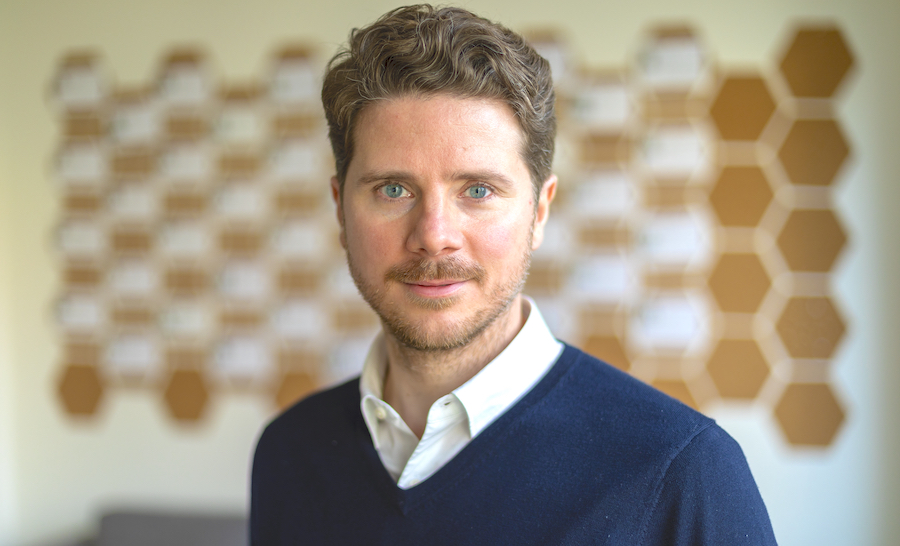 And Skribanowitz points out the value of this enjoyment along the often much-loitered route hearing aid users follow before they commit to a medical tech solution. “Hearing brings us so much joy; it’s music, it’s friends, it’s concerts, it’s all of that. There is a lot of well-being, but if I’m doing it in an unsustainable way, then I may have a great experience for two, three, four, five years, but then my hearing is gone,” Skribanowitz points out.

“We want to be more like glasses, so our glasses are not changing the TV, but are trying to compensate our individual vision.”

“If we look at this whole hearing world, there are on the one hand, let’s say, companies like Sonova, who are very much taking a medical angle and treating strong types of hearing loss; and on the other hand there are companies like Dolby, which deliver a great audio experience, but if you’ve ever been in a Dolby Atmos Cinema, you come out with a smile but with ringing ears, so it’s great in the moment but it’s not really sustainable,” argues Skribanowitz.

“Well-being also comes in for us in having a more sustainable way of combining that with a great audio experience. So, people know that louder is better but if you can make better at a lower volume, that’s the way going forward - a great experience but in a way that preserves hearing for the years to come,” the Mimi CEO ventures, making the point that “while we made huge advancements in work safety, so much that factory noise is not the main cause of hearing loss any more, our consumer electronics are accounting for a big chunk of noise-induced hearing loss”.

The devil in the details of hearing recorded audio

Meanwhile, he argues that “hearing aid algorithms are helping people when they cannot even understand a dialogue any more, but when hearing aids enhance recorded work, it is at the cost of audio quality”. The Mimi approach uses personal hearing profiles to make detail reach the ears of the listener, processing user data points to bring out more details. “Some details are lost because they are under the hearing threshold. Details in recorded music can just be brought up, increasing the volume, above the threshold.”

To deal with the difficulties of auditory masking - whereby the perception of one sound is affected by the presence of another sound - the greater digital sophistication of Mimi tech provides a solution. “Just using EQ and moving other elements up doesn’t reveal the details, but we are using more sophisticated ways of revealing some of the masked details, attenuating some loud sounds, amplifying some brighter sounds so that more details become audible again,” explains Skribanowitz.

Seeing is believing, is it not? If glasses are for seeing clearly, there is the metaphor Skribanowitz likes to use to describe what Mimi is providing for hearing: “If you buy a 4K television, of course you put on your glasses. If we look at audio, there’s really a lot of money spent in delivering the best audio quality, from amazing recording equipment, mastering, lossless codecs, and people are spending hundreds of thousands on headphones or stereo systems to have the best sound quality, but the last link in this chain, their individual human part, is not considered in this question, so it’s like us taking off the glasses while watching television,” he suggests.

Good hearing experience pointing the way to the audiologist

For the co-founder of Mimi, the motivation to take an adventure into hearing goes back to nagging his father about hearing difficulties the latter was experiencing in his early 70s. The answer became habitual: “I’ll do it next week.” Son Phillip, whose own career path traversed from a mechanical engineering base through user-centred design and business model innovation to work for Atlantic Labs as a venture partner and business innovator, eventually moved from an initial idea to build a home test that would not just leave people with the problem of having hearing loss but introduce them to what an improvement can be like.

“Maybe it’s ‘I’m not ready to take a hearing aid yet, but I’m really enjoying watching television like this and I realise it’s so much easier to follow the dialogue’,” he acts out this motivational leap to the next point along the route to seeing an audiologist. “So I think we are overall drastically increasing the accessibility, and with the tests people can very much individualise relative to their needs. “The outcome is that the people who know that they have hearing loss can suddenly do that in the privacy of their home, figure this out, again lowering the first step, and in our reviews we see people who say ‘finally I discovered this and now I’m seeing an audiologist’”

“In recorded audio, everything in the recording is signal, and you don’t want to eliminate the tubas to hear the violins.”

From another angle also, there is a knock-on for the hearing care industry and profession. Skribanowitz argues that Mimi’s delivery of quality audio can keep people’s hearing fit”so that at the point where they are getting a hearing aid, they don’t have this retraining phase, because they still have been used to hearing certain details.

A market with Apple on the horizon 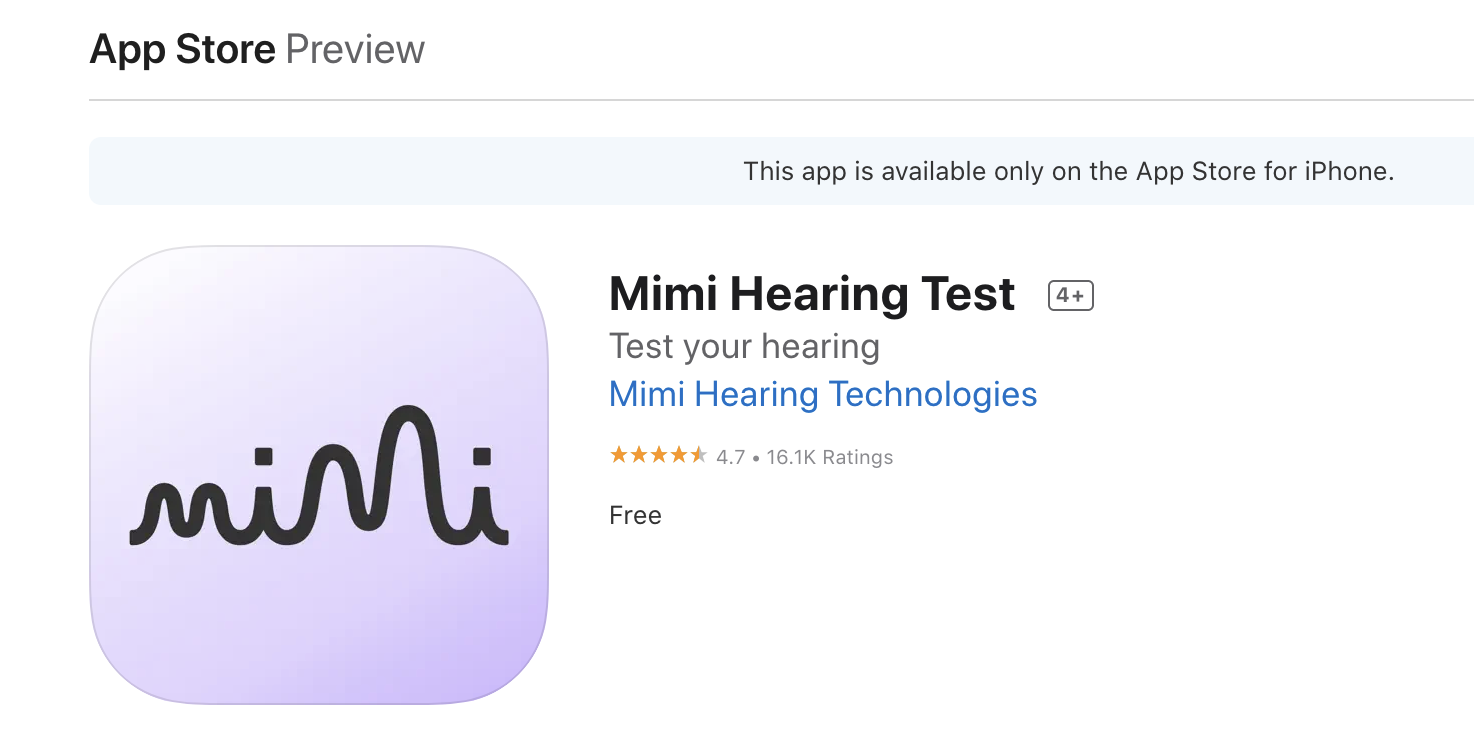 © Apple/Mimi Mimi is very much in view on the Apple landscape.

Mimi’s other co-founder, British hearing scientist Dr. Nick Clark, was busy developing biologically-inspired hearing aid algorithms before the two got together and realised that those algorithms were very natural sounding and also had a lot of benefits for earlier stages of hearing loss. Since forming the startup in 2014 and funding through venture capital, the two have surrounded themselves with a team capable of achieving deals with device and audio service providers that want to use the software development kit from Mimi (actually the Japanese word for ear!).  In addition to Loewe and Skullcandy, they now also have Cleer, Compaq, Kygo headphones, and beyerdynamic on board, and in August 2022 announced an expanded partnership with TP Vision to make Mimi’s sound personalisation available on Philips’ 2022 range of Ambilight TVs.

This choice roster of consumer tech brands, which gets the Mimi name out to Europe, Russia, Middle East, South America, India and selected countries in Asia-Pacific, represents the growing fulfilment of Mimi’s aim to focus on what Skribanowitz sees as the”street part“of the audio experience, not only headphones but also TVs, smartphones, streaming apps, all the places where digital audio is happening. Asked how his company regards the competition, this innovator points out that the average American now listens to eight hours a day of digital audio, across Spotify, Netflix, zoom calls, and other media, so it was important for Mimi to pick an area that is not so crowded.

“On the one hand you could see companies such as Dolby as a competitor, because they are also improving audio experience on a device, but they are very much owning the first part of the audio chain, whereas we basically go after the codec and take the personalisation and individualisation part there,” details Skribanowitz.

With Apple HealthKit recommendation of the Mimi App, and a number one spot for the Mimi Hearing Test on the App Store, a marketing pitch based on well-being also moves the project into the territory of a well-known tech orchard.

“Apple helped basically in bringing accessibility and inclusivity, making products better for everyone involved, and we have a very similar view on our technology, finding out what you need to find to make the product as close to matching your needs as possible,” says the Mimi CEO.

The firm is working with partners who sell a million units of their products, companies that are effectively doing the sweeping marketing for Mimi that it is still too small to achieve itself. Mimi claims it now has 50k to 80k people a month downloading its software. The seeds are well planted, and Mimi’s two audiences, its B2B partners and its end users, are well aware that something is growing here.