Interview with Sound of Metal director Darius Marder: “This film doesn’t have an opinion about cochlear implants.”

Darius Marder’s double Oscar-winning movie, Sound of Metal, has chimed from sweetly to jarringly in the audiology community. In this exclusive interview, the director throws light on the complex blend of story, character portrayal, and audiological realities in this must-see film.

The noise that Sound of Metal has made about hearing loss is undeniably loud and far-reaching. Comments across the audiology community reflect joyful surprise and gratitude that director and writer Darius Marder’s story of a noise-metal drummer who experiences sudden hearing loss finally made it through the Hollywood business filters to become a cinema screen product, and one whose success has been recharged non-stop by prizes from the film world.

A simple story with unfolding complexities

The Sound of Metal noise reverberated around the Academy of Motion Picture Arts and Sciences, drawing no fewer than six Oscar nominations (winning two, for Best Film Editing and Best Sound).

Those are serious awareness decibels for the issue of hearing loss, which at least seems to be the central focus of the film, as actor Riz Ahmed, in a stellar performance, channels the catharsis and conveys the horror of the sudden deafness his character, Ruben, will deal with through several degrees of shock, panic, and masterfully transmitted angst.

But we learn, and subtly, that Ruben’s sudden sensory catastrophe, a none-too-surprising occupational consequence of his exposure to eardrum-shattering music, has arrived on top of another problem, his drug addiction, from which he is so far successfully in rehab.

The story is apparently simple. A guy loses his hearing. What will he do about it to bring us back to the order we crave at the end of all movies? But there’s the other problem too: Ruben’s drug past. And is this also the end of his relationship with his girlfriend, Lou, who has been by his side, as singer and manager, screaming along in performance to Ruben’s drumming?

It is the hearing journey part of the film, however, that has brought dissenting voices against Sound of Metal. Ruben finds his way to Joe, the deaf leader of a sober house for deaf addicts that is run strictly to Deaf community ideals. Ruben is bent on getting his hearing back and, against the house rules, anxiously pursues the route of technology: a cochlear implant. But for Joe, superbly played by Paul Raci, an actor who was actually raised by deaf parents, deafness is something you don’t fix. 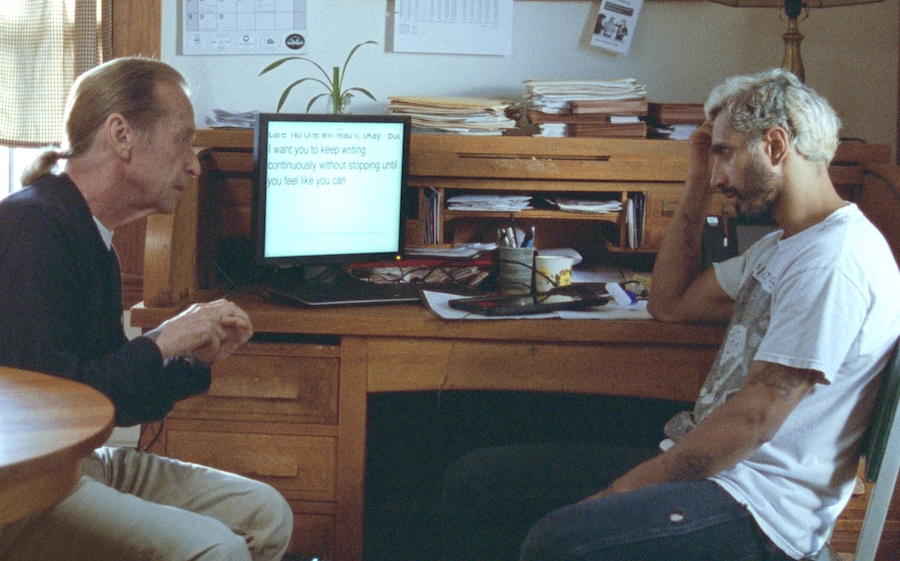 AWN: Nevertheless, Sound of Metal does appear to lean towards the philosophy propounded by the sober house leader Joe that deafness is not something to fix. Was it the film’s intention to get across that the moment of stillness, the “kingdom of God” Joe talks to Ruben about, is the right and only goal for someone with deafness?

AWN: You and your brother first came into contact with hearing loss through your grandmother’s sudden deafness. Was that an important influence on Sound of Metal?