A documentary on tinnitus: a worldwide first

Four tinnitus sufferers feature as actors and director in "Oírse" (The Sound Inside), a Spanish informative film project offering spectators the chance to immerse themselves in the reality of this health problem thanks to a "subjective sound" technique (similar to "subjective camera"). Its director and 'alma mater', David Arratibel, tells us all about this worldwide first film project.

David Arratibel has suffered from tinnitus since he was 16-years-old, but his career as a creative executive in advertising got under way slightly earlier, just over two decades ago. Today, however, it is cinema that most attracts him, and he owns up to being a huge consumer of movies and a devotee of film analysis.

Becoming a scriptwriter and director meant a double challenge for David: getting across how a tinnitus sufferer really feels, and turning his keenness for creation into a complete screen project. The result, in his own opinion, is a "hybrid" between the informative and cultural, a "rare product of uncertain definition" and all of the baggage this enthusiast of the "documentary essay" carries with him. Unlikely to fit in the documentary category, the work is too long, at 54 minutes, to compete with short films, making it a medium-length feature that will not be welcomed on the commercial circuit for feature-length movies. As a work for TV, it also presents difficulties, its highly experimental narrative style being too unorthodox for most home viewers.

Despite these drawbacks, the film was selected and screened as part of the 'Zinemira' section in the 61st San Sebastian International Film Festival (Spain), an event widely known to the public due to the big stars who regularly attend. There were screenings too at the International Independent Film Festival (MARFICI) of Mar del Plata in Argentina, and at Cinespaña in Toulouse (France). Beltone covered costs for the screenings (copies in DVD, transport, shipping, etc.). "I want to thank them for this support because if we had not had this the film would still have been made but would have had far more problems being shown," underlined Arratibel .

"Listen to the silence"

Arratibel (photo below) has a natural talent for self-analysis, not only of his first film opus, but also of his description of his own hearing problem. "I have tried to explain that tinnitus is not due to exposure to noise nor to a physical problem, but that it comes about at a crisis point in one's life," he claims. Through audiometric evaluation of the frequency of the tinnitus suffered by the film's four actors, Albaro, Elena, Gotzone, and David himself, these sounds are reproduced using a "subjective sound" technique so that the audience can sense what each of them is going through. The "subjective sound" technique is similar to the "subjective camera" technique, by which what happens on the screen is seen through the eyes of a protagonist. 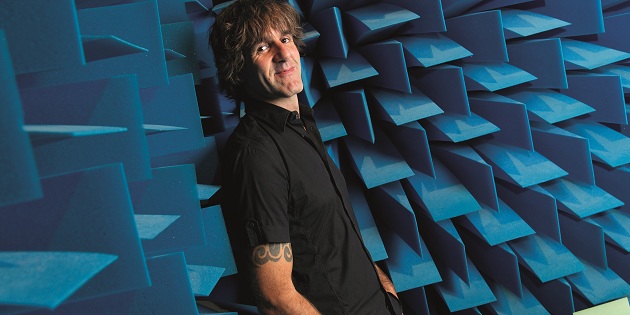 The film's locations have also been chosen according to the origins of its actors, and these include the industrial landscape of a town close to Bilbao, a country house in Vitoria and the region of Navarra (all in the North of Spain). The director brings out the atmosphere created during a scene in an anechoic chamber (designed to absorb all the reverberations of sound and electromagnetic waves), thus paying tribute to the experiment conducted by John Cage in the 1950s in his work 4'33", a piece of music of this length with no instruments having been played but which demonstrates that silence does not exist; since a human being in these noiseless conditions will hear his or her own breathing, blood circulation, or the electricity of the nervous system. Director Arratibel has chosen an "observational, or perhaps 'audiotional' language to show the impossibility of silence", as he explains it. With regard to his spell in the anechoic chamber, which is in the University of Navarra, just 200 metres from his own home, he described it as an overwhelming experience for anyone.

Trailer for the film, where each of the four tinnitus sounds, one heard by each actor, is reproduced separately.

On first hearing of Arratibel's project, GN Group, the producer and distributor of Beltone and ReSound brands, decided to "sponsor" screenings. The firm, with a long experience on this complaint, has developed devices with sound generators or "tinnitus breakers" and backs for multidisciplinary therapies such as TRT (Tinnitus Retraining Therapy) with maskers which also offer solutions for hearing loss.