By means of a constitutive decision made in July 2013, the German National Association of Statutory Health Insurance Funds (GKV-Spitzenverband), has effectively doubled standard rates for the care of people with hearing loss, and significantly increased performance requirements for hearing aids. The association brings together 34 public health insurance funds. The new standard rate is applicable as of November 1, 2013. Gernot Kiefer, head of the GKV, explains: "A broad market analysis and in-depth discussions with manufacturers and representatives of patients showed that we needed to make this change. The aim is to provide more suitable care for people with hearing impairment. With this new amount, care will be improved considerably.”

To ensure that appropriate care is provided, taking into account the latest advances in technology, hearing aids must now have the following minimum technical characteristics:

Focus on the standard rate

If people insured in the public system need hearing aids for medical reasons, they will be covered by statutory health insurance. Insurance funds will cover the standard rate mentioned above. This amount corresponds to the maximum outlay generally funded by health insurance schemes for hearing aids. To remain within this limit, the various stakeholders must ensure that patients receive care with no additional costs, in other words without having to pay a personal contribution that would exceed the individual’s portion. The GKV therefore recommends that insured people always ask their hearing aid specialist for hearing aids that do not exceed this amount.

There has however been strong criticism from many players in the sector against the reform. The German association for the hearing impaired (DSB) – probably the largest patient organization in the area – has appealed against the fixed amounts because it considers the sum insufficient.

The German Association for Hearing Aid Specialists (biha) was indeed consulted as part of the decision, but was not called on to participate. From the point of view of the hearing aid sector, this is a matter that should not be taken lightly.

According to the critics, it has become clear in the meantime that no health insurer pays the 784.94 Euros. The amount is considered to be a type of upper limit that no insurer should exceed. The individual contract price with the insurers is therefore always below this level, especially with regard to the second device needed in bilateral hearing loss. The amount to be reimbursed is reduced in this case. A few examples: 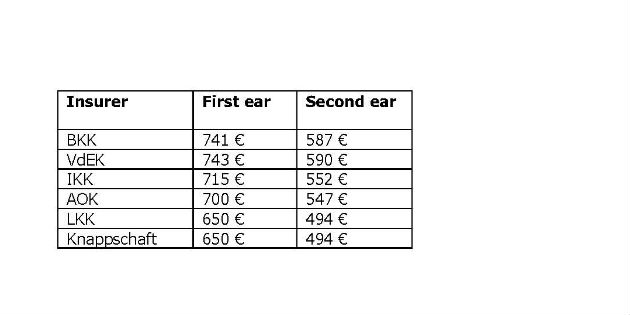 In addition to the DSB, biha and the Federal Association of the Hearing Aid Industry have filed complaints against the fixed amounts.