The world’s biggest hearing event, the EUHA Congress, celebrated its 65th international edition in Hanover from September 15 to 17, its organisers triumphantly hoping for a final calculation of over 50% of the 8,000+ visitors it attracted in pre-pandemic 2019.

But the pride was evident among organisers as the event opened its doors for an exhibition day in Hall 6 of the vast and otherwise ghostly Hannover Messe complex, EUHA President Beate Gromke greeting the first to arrive before speaking at the official inauguration and a prior reception for the media. She told Audio Infos UK that organisers were thrilled to be able to draw such a healthy delegate number, and pleased to pioneer the return to in-person events in the German Low

"We expected to have around 70% attendance compared to 2019, but attendance is 62%" specifies Gromke.

The gathering merits even more kudos for the organisers, it being the first congress of any kind to take place at the venue in Covid times, proving a litmus test watched by German Health Ministry officials interested in data on which to base similar shows. Strict health measures were observed for all in attendance.

“I feel proud and excited that we are the first to hold such an event here since the pandemic began, not just from the hearing sphere but any sphere,” said the EUHA President. 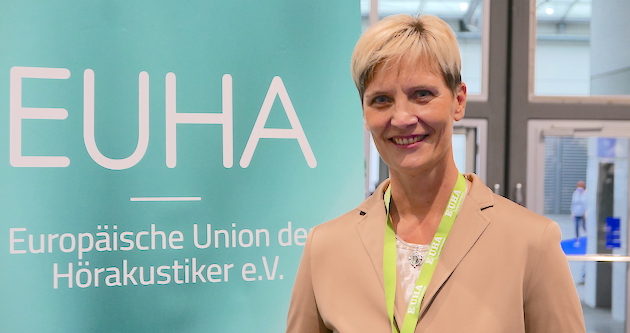 She underlined that at the point of deciding to go ahead with the event, everyone on the EUHA board had “cold feet”, but bravery and trust in planned measures won through. Gromke also underlined the valour and enthusiasm of the many visitors registered for this physical gathering, most of whom come from countries in the north of Europe.