CAN YOUR BUSINESS SURVIVE THE DISRUPTORS?

Two field studies carried out in Spain have shown that bilingual hearing loss sufferers develop language skills and abilities superior even to those who communicate in just one language. Mark Guiberson, Ph.D., of the University of Wyoming, presented the results during the 2nd Conference on Bilingual Education for children with cochlear implants and hearing aids, which was held in November in both Madrid and Barcelona.

The choice of Spain for these field studies was by no means a coincidence, since 53% of adults there - according to a census put together by the National Statistics Institute - speak two or more languages. This is due to Spain boasting many autonomous communities, a circumstance that brings much linguistic variety. English, meanwhile, is one of the most widely spoken foreign languages. Spain has also seen an increase in educational programmes promoting Spanish-English bilingualism, with 379 Madrid schools taking part in such schemes, as well as 68% of children in primary schools in several other regions.

This rich linguistic panorama and the natural bilingualism of its regional autonomous communities makes Spain an ideal place for studies of bilingualism in children with hearing loss, as Mark Guiberson underlined during his presentation, stressing that there is no scientific proof that learning a second language takes away from or damages the first language learnt. In fact, the evidence points to the contrary. He concludes that children with hearing loss who were bilingual had a higher level in their first language than their monolingual schoolmates in their solitary language.Certain scientifically unfounded prejudices linger and these challenge the thesis of Cummins, for example, whose evidence supported the model known as Common Underlying Proficiency (CUP). At least a third of families (38% of those surveyed) feel discouraged from educating their children according to a bilingual communication programme they have been persuaded not to follow. This may be why education of children in two languages is adopted in only 59% of homes. Guiberson's response has been to design a model and demonstrate what factors influence families in their decisions to choose this option for children with hearing loss.

Those who have most influence on the decision are relatives, speech-therapists, and other families with deaf children. Audiologists and otorhinolaryngologists exert less influence, with parents giving more importance primarily to options put forward by schools. Parents do, in fact, call for more opportunities closer to their homes, as well as better information on communication options to help them with these key decisions.

This US specialist gave his presentation to some one hundred fathers and mothers, speech experts, prosthetic audiologists, and other professionals, and he reviewed past research studies around the globe on bilingualism, revealing that few longitudinal works have been carried out on children with hearing loss. Due to this gap, he calls for research to be continued.

"The results of the two studies (in Spain) indicate that bilingual children with hearing loss demonstrate linguistic abilities comparable or even greater than those of their monolingual classmates. This is a positive discovery and one which, together with early diagnoses of deafness and prompt access to technology such as hearing aids and implants, can result in higher bilingualism levels among these children," Guiberson pointed out as one of his conclusions.

Working from this premiss, his recommendation for families is that "they should consider all communication options for their hearing-loss affected children, including bilingual education, so that they have the same opportunities as their normal-hearing peers." He urges families to rid themselves of "anxiety" based on the erroneous idea of "language confusion", which is refuted simply by the results of the aforementioned studies. He did also point out that learning a second language requires "exposure" to it, meaning it must be listened to for more than "a few hours in class each week." 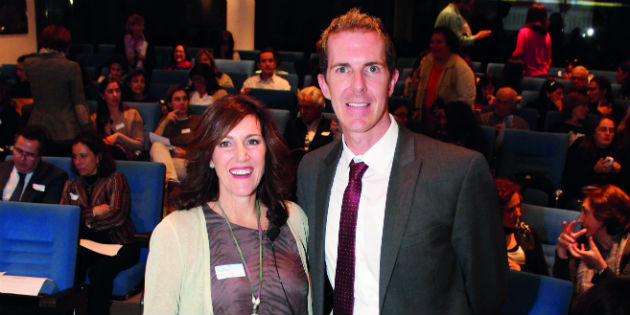 The conclusions of these two studies carried out in Spain have been published as scientific research articles in English in the American Journal of Audiology and Cochlear Implants International. T-oigo will also disseminate these articles in Spanish for professionals who wish to read the complete versions, announced Dale Sindell, who ratified the success of holding this double conference in the two largest Spanish cities. The event attracted interest from people in Bilbao, Vigo, Valencia, Pamplona, Valladolid, and also from the USA. Sindell (with Guiberson in the picture), the founder and force behind T-oigo, is a hearing aid user herself, as is her son, and she is calling for each individual to bring his or her "grain of sand" to further research in this field. "Together, we can bring improvement through parent groups, resource centres for the disabled, and schools with different programmes for these children.

This electronic and anonymous survey was carried out among families with children who, in 69% of cases, had been given cochlear implants (32% had a second implant), and who, in 49% of cases used hearing aids. The great majority (63%) were suffering from profound hearing loss. Subjects were drawn from 13 of Spain's 17 autonomous communities, mostly from Madrid. It was noted that classmates and grandparents were those most supportive of children and involved in their decision-making, followed by other relatives and friends, as well as families of other children with hearing loss. Involvement of others - in this order - included speech-therapists, audiologists, and specialist teachers; to a lesser extent, otorhinolaryngologists, teachers, and heads of schools; the least involved were GPs, paediatricians, and other advisors. Forty-nine percent of parents claimed they had to go to lengths to obtain information about the options for their children, and 54% said they would have liked to have more alternatives. Furthermore, 71% claimed that the type of services schools provide constituted an important factor in the decision on which mode of communication to choose, as did the availability of services close to home in 40% of those surveyed. Thirty-eight percent of hearing-loss affected children whose parents responded to the survey were bilingual, and 70% of parents said they were convinced that children with hypoacusis have the ability to develop skills in two languages and that they did not see this as a difficult task for their children.

The second study carried out, the SOLOM Observation, analysed "the language skills of bilingual children with hearing loss in Spain" in comparison with monolingual children, and involved evaluations of parents with regard to their child's progress. In this case, 51 cases were surveyed through the web pages of groups of parents of children with hearing loss, schools, and treatment programmes of affected children from between three and 18-years-old, and who were suffering from no other disability. They answered online through a secure connection and the survey included the structured Student Oral Language Observation Matrix (SOLOM, developed in 2010 by Echevarría and Graves). "This is to assess mastery of oral language in children in terms of opportunities for our children and to rid them of barriers. In spite of their hearing loss, they can have the same future as any normal-hearing child," said Guiberson.

The family is the key

Another statistic that seems to sweep away doubts as to whether human beings can acquire a second language is that 250m people worldwide have moderate, severe, or profound hearing loss (according to World Health Organisation figures from this year) and between 50% and 67% of the world's population is bilingual, "therefore one expects a high proportion of hearing-impaired persons will come from communities where more than one language is used," Guiberson points out. To illustrate this, a specific case was put forward, that of Julia, who left Mexico for the USA aged just 10-months-old and was later found to have severe-to-profound bilateral hearing loss. She was given a cochlear implant at five, a late age according to recommended protocols, although this did not stop her learning Spanish and English. And her educational centre had initially advised against this. Three years after the implant operation, this child managed both languages with ease, and she is now going to secondary school and alternating between the two languages.

Entering into detail with regard to the two studies carried out in Spain, Guiberson explained that the first was based on the taking of decisions associated with the communication mode and bilingualism in children with hypoacusis, with the participation of 71 fathers and mothers questioned in their first language, being asked through the use of different sentences to indicate degree (from 1 to 5) of comprehension, fluency, vocabulary, pronunciation, and grammar. No significant differences were detected between the two groups - bilingual and monolingual - on comparing age, degree of hearing loss, or cochlear implant status. There were differences, however, in SOLOM scores, and one of these was appreciable: "The bilingual group registered significantly higher SOLOM skills than the monolingual group." Fifty-two percent of parents rated their child's ability with a second language to be better than they had expected before they began to learn it, while 28% claimed they had reached the level they had, a priori, estimated they would reach. Children with hearing loss who were bilingual showed significantly superior first language skills than their monolingual peers, "a result in line with a growing number of studies showing that children with hearing loss are capable of being bilingual," said the expert from the University of Wyoming. With regard to "limitations", he pointed out that SOLOM mastery levels are based on parents' perceptions, and their expectations are based on personal experiences, beliefs, etc.

Guiberson also underlined that some of those surveyed were not speakers of the second language their children knew, and about which they gave an opinion. In respect of recommendations, Guiberson supports the development of this second language, using general Auditory-Verbal strategies (short phrases, synonyms, repetitions…), and the participation of children in exchange schemes with foreign language speakers.

Dr. Mark Guiberson is a US researcher and author of numerous studies related to bilingualism in children with language disorders. He has published many articles in scientific journals. He lectures at the University of Wyoming and made his first visit to Spain in 1996 as a student.

The grumpy, lazy, manipulative, rude, and jealous. Here, in part two of our four-part series on management psychology, are five toxic types you may find in your practice, store, or office. How do you manage these difficult personalities? Learn some proven psychological stratagems.

Read more...
Visit to an audiologist may have saved Birmingham man's life

The significance of hearing care - as in both audiologists and hearing technology - is increasingly being pushed up the health ladder. And a recent case of a Specsavers customer getting life-saving advice from his audiologist brightens the spotlight on this importance.

ShengWang, the Chinese hearing aid chain of some 500 stores this month fully acquired by the Danish hearing giant Demant, brings the makers of Oticon and Philips devices 5% of the Asian country's retail market share.

The UK audiology community was shocked and saddened Wednesday (June 15) at the announcement by NIHR Nottingham Biomedical Research Centre of the death of its Clinical Hearing Sciences Group lead, Reverend Professor David Baguley.

There's just a summer to go - and you know how those fly - until the expansive halls of the Hanover Deutsche Messe convention centre in Germany opens its doors to the audiology world. EUHA is coming, and the organisers' annual video invitation is already here.

The Bluetooth Special Interest Group (SIG), the standards mover and shaker for the short-range wireless tech now crucial for our key electronic gadgets - and hearing aids - has announced its next major enhancement: Auracast.

Rechargeable and street-stylish, the new ReSound Custom hearing aid has a planned regulatory and global roll-out date of June 29, 2022. It confirms GN Hearing's faith in the attraction of the earbud form factor.

Pure 312 AX is the new kid on Signia's Augmented Xperience block. This hearing aid has an RIC design and uses Zn-Air batteries that last for up to four days, boasting direct streaming to Android and iOS devices.